Located in the “Media valle del Serchio” which simply means “the river Serchio’s middle valley”, Barga is one of the valleys enclave boasting Ligurian origins.

Around the countryside of Lucca, and in particular the Garfagnana have strong history links with the “Lombards”. The history of these areas are also strongly linked to the undertakings of the leader Castruccio Castracani.

The valley is rich in villages and hamlets that still maintain their original medieval detailing. Barga today is a tourist destination that offering its visitors countless points of worthy of interest be that historical, artistic and architectural. Let’s not forget the areas culinary traditions and the unexpected arts scene.

The enclaves former Ligurian origins were decimated by the Roman army in 180 BC. By the tenth century, it belonged to a Lombard family called Rolandinghi and later passed under the dominion of Lucca, who in 1236 created three vicariates of Barga, Coreglia and Castiglione. The new overlords, however, were displeased with the local population who flaunted their authority by entering in to trade relations with Lucca’s rivals the Florentines. 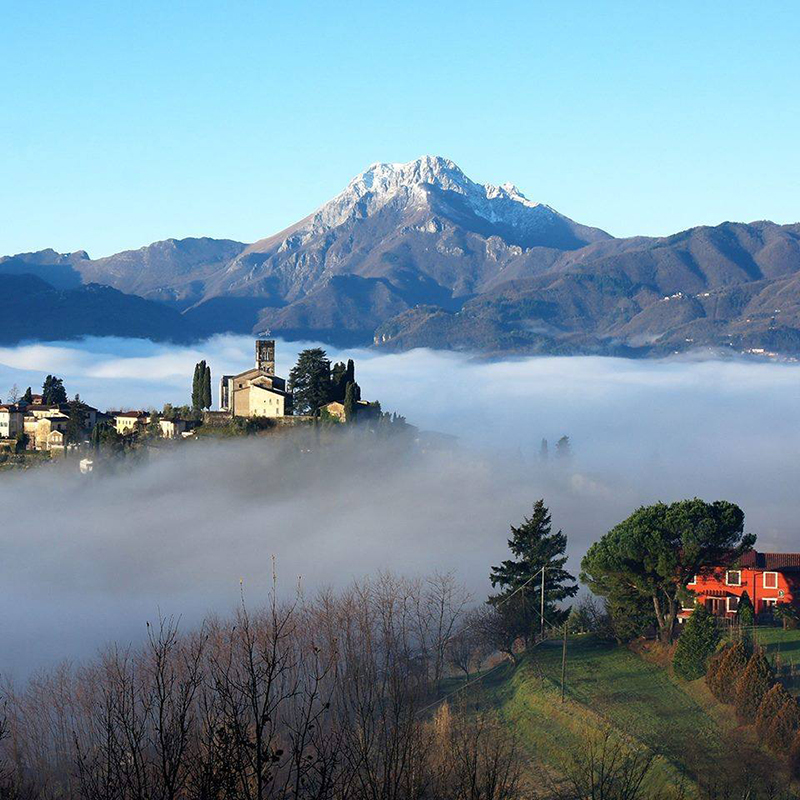 Barga’s urban layout is typically medieval, but we should not overlook the contribution of the elegant Renaissance palaces built during Cosimo de Medici dominion. In the highest part of the village, where the eye goes up to the Apuan Alps, is the city’s 11th century Cathedral, dedicated to St. Christopher, the façade with alabaster detailing which reacts with the changing depending on the climatic conditions. The main portal has two columns surmounted by two lions and a lintel depicting a harvest scene. Inside the church is a wooden statue of the saint and a painting of the “Madonna del Molino” which is 14th century, while the fonts in are 12th and 13th centuries. The pulpit, of particular beauty is adorned by sculptures and supported by red marble columns at their respective base sculpted two lions and a man sitting. The bell tower, decorated with battlements, with mullioned windows which inspired the poet Giovanni Pascoli, during his stay in Barga when he composed “L’ora di Barga”.

On the large garden surrounding the Duomo, called the “Arringo”, overlooked by the Praetorian Palace, the former offices of the Florentine commissioners, under whose Loggia it is still possible to see the Florentine weights and measures of used at that time, “bushel” and “arm”. The building now house the city museum. A staircase leads down from the cathedral to the XIII century Church of SS Crucified, with its three naves and a monumental altar with gold decorations, stucco and a beautifully carved wooden choir. Outside the medieval center, it is the fifteenth-century Church of San Francesco, which hosts numerous works of art. Which deserve special attention the glazed terracotta by Della Robbia, dated between the fifteenth and sixteenth centuries.

In 1895 the poet Giovanni Pascoli, who had long been looking for a quiet, secluded location, bought a large house in Castelvecchio di Barga, where he lived with his sister until 1912, the year of his death. The Pascoli Villa is where he composed the “Canti di Castelvecchio”, “Myricae”, i “Primi Poemetti” and “Poems Conviviali”. Today his home is a house museum in which are preserved intact the furniture and you can see objects and documents belonging to the poet as well as his original manuscripts. In a chapel near the house are the grave of the poet and that of his sister Maria.

Any cookies that may not be particularly necessary for the website to function and is used specifically to collect user personal data via analytics, ads, other embedded contents are termed as non-necessary cookies. It is mandatory to procure user consent prior to running these cookies on your website.